This afternoon I went to the funeral of Mrs. Naomi Woody. She was 97 years old and the epitome of the Proverbs 31 woman. She truly loved the Lord and was a prayer warrior. She made blankets for babies at First Church where I was the Children's Pastor for 9 years. While I was on staff at First Church I had the privilege of taking baby bags to all the new moms. One of my favorite things to do was to tell these new mommies that Mrs. Woody had made a blanket for their baby and as she crocheted she prayed for the baby that would sleep on that blanket. I remember that I couldn't wait to be a mom so I could have a Mrs. Woody blanket! I was no longer on staff when I had Maddie and Mrs. Woody made two blankets for her, a summer and winter one! It was fabulous. When Fletcher was born we were no longer attending First Church, so no Mrs. Woody blanket. In August 2005, Fletcher was in very critical condition at Baptist Hospital and my sister organized a prayer vigil for him. Someone told Mrs. Woody about it and she asked to brought up to the hospital so she could pray for Fletcher. I'll never forget that day, as soon as I saw Mrs. Woody I began to weep. I felt like the Lord had sent the cavalry to pray for my sweet baby. I also had the most incredible peace after she prayed. I'm not sure, but I'd imagine that Mrs. Woody had probably not seen a baby intubated and at the time the doctors had paralyzed Fletcher so he could get some much needed rest. She saw Fletcher at one of his worst times and it troubled her a lot. We sat in the PICU waiting room and she cried for my sweet Fletcher telling me she could not understand how he could be so sick and have so many things wrong with him. She also gave me a blanket for him, that she had prayed over and she had anointed it with oil. She was truly an amazing woman who knew God's Word so well. She could bring a scripture into every sentence she spoke. What a great legacy she has left for her children, grandchildren and great grandchildren. What an inspiration she was to me and many others. At the service today I sat and wondered if her children had any idea what an influence she was on so many people. I sure hope so, it was a blessing to have her in my life. I told Craig today that I wish I had thought of taking a picture of Mrs. Woody at the hospital with Fletcher, I'm sad that I don't have one. But, I do have great memories of her that I'll treasure forever. I took some pictures of Maddie and Fletcher with their Mrs. Woody blankets this week. Maddie's blankets were up in her closet, I only used them when she was a tiny baby. I decided to tell her about Mrs. Woody and let her have the blankets to use. She knows they are very special. I have always used Fletcher's blanket, but I don't leave it at the Children's Center, I do get it out every time he comes home. Though I am sad that Mrs. Woody is no longer with us, I know she is in Heaven where she has longed to be. I love you, Mrs. Woody! 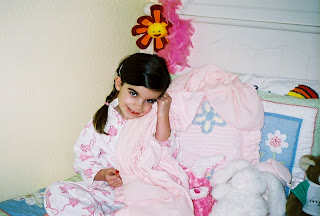 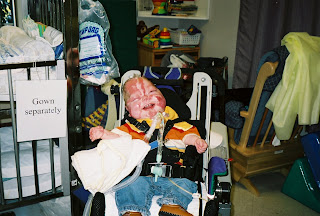 Email ThisBlogThis!Share to TwitterShare to FacebookShare to Pinterest
Labels: Family

I remember when you told me Mrs. Woody came to see Fletcher. That seems like such a long time ago.