Let's see...the week started out pretty good. Monday Maddie had a playdate with her friend Bailey. And on Wednesday morning we had a trip to the zoo planned with her class. On Tuesday night Maddie informed me, "Mom, you're probably going to be mad and I'm sorry, but there are no seat belts or car seats on the bus!" Well she rode that no seat belt, no car seat bus and loved it! It was her first time ever to ride a bus and one of the big highlights of the trip! We teamed up with Maddie's friends Bailey, Kayleen, Ryli and Tressa and had a great time for about an hour and half! All of the sudden Maddie had a fever so she and I ended up leaving the zoo early AND in the minivan not the school bus! By the time we got home she started throwing up. I just knew she had strep throat again, but much to my surprise and the doctor she tested negative for strep. He decided she had a virus and we went home. She continued to throw up until late Friday morning. Friday afternoon I made arrangements for her to go to my best friend's house for a couple of hours so I could go and see Fletcher. When I picked her up at 3:00 she was back to her old self and has been fine ever since. Go figure!

Friday morning The Children's Center had a land run. I was unable to go because I was at home with Maddie. I was really sad to miss the land run, this would be the first time one of us wasn't able to be at one of Fletcher's TCC events! So, I asked if someone would please take some pictures. Well, one of the girls in the marketing department took some great pictures! Since I wasn't able to be there I'm not quite sure what took place in the picture below. But I am sure it's one of my new favorites. Do you suppose he's an 89er? The look on his face just cracks me up and that pie tin! What a hoot! I'm almost positive that there are several girls in front of him and he's flirting with all of them! Well, I need to close for now hope you all have a great week! 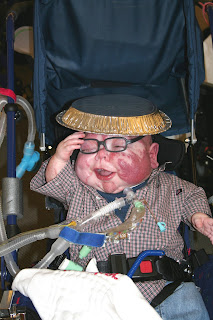 Sorry it's been so long since my last post, things are crazy around here!!!! We had a great Easter. Craig, the girls and I went to church of course, where we had an egg hunt and a wonderful time of worship and a great sermon! Then after church we headed to The Center to have yet another egg hunt with the Burns and Milgrim families. It was very cold but the kids didn't seem to mind at all. Thanks to everyone who spent another holiday with us at TCC! We know it's not the most normal of circumstances but we really appreciate the fact that Fletcher gets to join in the fun with all of his cousins! It means a lot to us to be able to be with all of you. 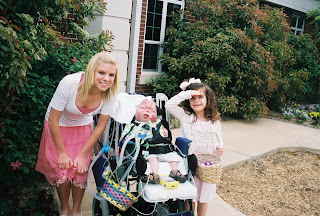 Kayleigh, Maddie and Fletcher Easter 2007
Kayleigh is getting ready to do CRT testing at school so remember her in your prayers. She has also started playing softball she's the catcher this year. We're looking forward to going to games and hanging out at the ballpark. I sure hope it warms up a lot!
Maddie just finished a reading project at school. It was called 'Reading Around the World' we kept track of each book that we read to her and for every five pages that she turned in she made a trip around the world. Well, she read ten pages so she went around the world TWICE! They had an awards assembly last Friday and Maddie received a gold medal with two ribbons! Way to go, Maddie! 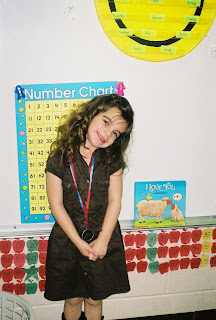 Maddie's Reading Gold Medal
Fletcher had his follow up appointment with the ENT. He has another bad ear infection and it's draining some yucky stuff! TCC did a culture on the yucky stuff and found out that he has three different bacteria one of them ecoli. Dr. Digoy wasn't too worried about it and decided to go the ear drop round instead of an IV antibiotic since he's resisitant to so many. We're hoping this will work and we won't have to have tubes again. Other than that he's had a pretty good week. He went to class every day and his PT is back from maternity leave, boy are we glad! Hopefully she'll start working with him a lot! He also got a big boy bed and a custom made wheelchair! It is a Tiger 2000, it's almost like a stroller and is collapsible so maybe we'll be able to put our whole family in our van when we take Fletcher home next time. That's it for now. I hope you all have a great week! 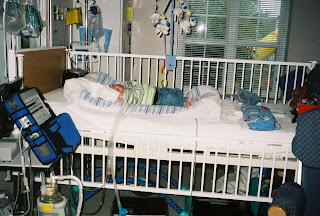 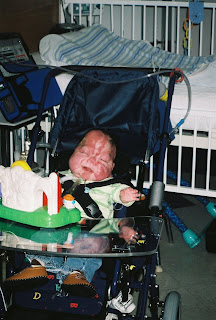 Well, we had a successful time at home with Fletcher. He did great and we really enjoyed being able to go to church together. Craig and I were exhausted after we took Bubba back to TCC. WOW! Our respect grows for the nurses and respiratory therapists who care for him! We realize why it takes 3 shifts of nurses and 2 shifts of RT's to care for him, lots of medicine and breathing treatments! It was a lot of hard work, but worth every minute! Maddie and Fletcher waved palms, well Maddie waved palms. I have always loved Palm Sunday there is just something about seeing children walking through the sanctuary praising the Lord! I was so blessed to push my sweet Fletcher in his wheelchair with his sister walking proudly beside him. 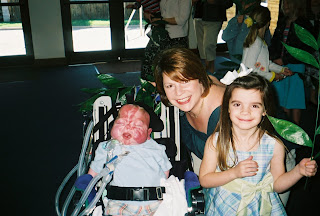 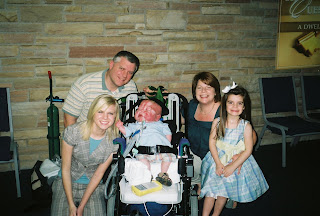