In late 2007 when we found out about Fletcher's rickets we had to alter his physical therapy...a lot. They eliminated a few things, adjusted a few things but one thing that was very important and very valuable was standing in the stander. His PT eliminated standing because it was just too dangerous with Fletcher's fragile bones. Well, for the last two Thursdays Fletcher has tolerated standing in the stander because this boy is growing, he's stronger and it's just time for him to start working on bearing weight! I can't begin to tell you how exciting this is for me. Fletcher looked so BIG and TALL in that stander yesterday and I was so proud of the forty minutes of his hard work! We did have to work overtime trying to keep him busy and distracted. Fletcher is also rolling over now and bearing weight on his arms which is an amazing accomplishment for our little guy! I can't say it enough...the Lord is working a miracle in Fletcher! It's such a privilege watching the Lord at work in Fletcher's body. Almost two years ago we were working a plan of letting him go, managing his pain, preparing ourselves for the worst. This boy was 'wasting away' his bones were, for lack of a better word empty! They told us he had the bones of a 95 year old woman. Look at him now! Nothing is going to stop him. I believe one day Fletcher Samuel Burns is going to walk! I'm so grateful to feel hopeful! 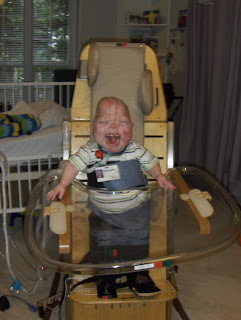 He did it!! And with a smile on his face! 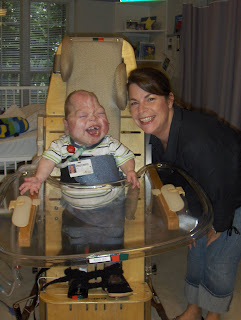 Fletcher and a very proud Mommy

Fletcher's last Pamidronate infusion went well. We did have one problem. Fletcher had to have a peripheral line since we were having problems with the port. Well, on the second day of the treatment they found that his IV was in an artery instead of a vein! Not good! But it all turned out fine they changed it out and put it in his other foot and finished the treatment. Through the process we found that the port is clean. No MRSA and it's usable. Praise the Lord. They are keeping it covered and using a special bandage that should help the skin grow back over the port. So, we'll see what happens and I'll keep you posted.

We are bringing Fletcher home today! We have a few things planned. We're going to the Buddy Walk at the Bricktown Ball Park then home for football and a yummy birthday dinner for Craig! I'll post pictures soon. Have a great weekend!

Today Fletcher started day one of a three day infusion therapy of Pamidronate. They had to start a peripheral line on him this time because his port is a mess right now! The skin around his port is colonized with MRSA so it's not safe to use the port because we don't want the port infected with the MRSA. The port had been oozing pus so they've been culturing it every week to see if it is growing anything so far so good, but the skin that covers the port is non existent and the actual port is visible! It is quite a sight to see. They are keeping it covered and working on different options to make sure we can keep it.

Today Fletcher's dermatologist, Dr. Adelson came to check on him. Fletcher has several warty moles on his head and Dr. Adelson is trying to find the best and safest way to remove them. So that's been tabled for a bit. He also suggested that we start a relationship with a pediatric plastic surgeon. Fletcher is doing so well that we think it's a great idea as well. So I'll keep you posted on all that. 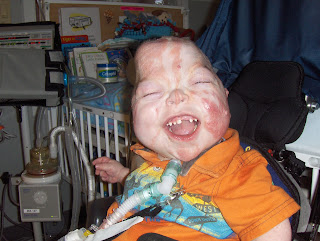 We brought Fletcher home for Labor Day and enjoyed a wonderful time with our families and great food! Fletcher did extremely well we could tell he really enjoyed being at home. He didn't nap all day! Fletcher entertained all of us and we all entertained him! It was a great time at home for our family one of our best trips home so far. Fletcher is all personality these days! What a fun little kid he really is! We plan to bring Fletcher home on the 10th for Craig's birthday. We're also going to take Fletcher to the Buddy Walk in Bricktown. It'll be a first for him. We're a little nervous but I think he'll be fine. I'll keep you posted! Well, that's all I've got for now! 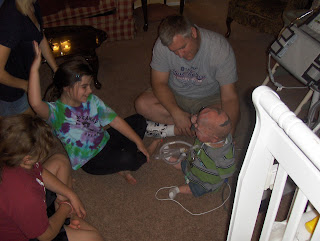 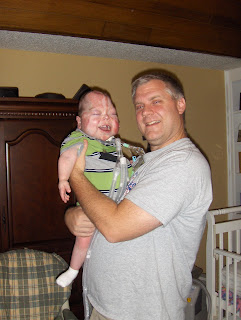 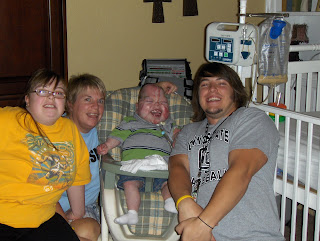 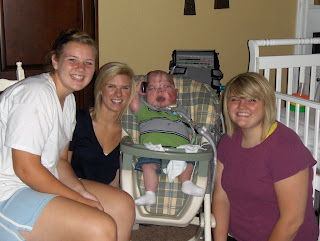 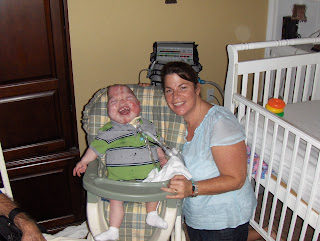