Maddie turned 5 years old yesterday! When she was about 3 she wanted to chew some gum and I wouldn't let her, I told her when she was 5 she could then chew gum. Well, Maddie held me to that promise. Craig, Kayleigh and I woke up early and went into Maddie's room to wake her up and say happy birthday, Maddie's first words were, 'after I eat some cereal, I'm gonna chew some gum!' So, true to her word, the moment she finished her breakfast she chewed the gum Kayleigh got her for her birthday! Maddie had a great day. I took cupcakes to her school, after school she got to have lunch with three of her favorite friends, Carder, Max and Zeke. They went to Chic Fil A and had a lot of fun together. I picked her up and took her to the doctor for her 5 year well-child appointment, Maddie got one shot, probably not the best part of her day! What was I thinking making her well-child appointment on her actual birthday?! We also went to church, it was a very busy day. Saturday Maddie will have her first 'real' birthday party, which means she gets to have friends at her party not just family! We are having it at PUMP IT UP a really cool party place with tons of inflatables! I have invited about 24 children! WOW! What was I thinking? Really, it should be lots of fun. I'll post some pictures after the big day! Need to go for now. Thanks for stopping by! 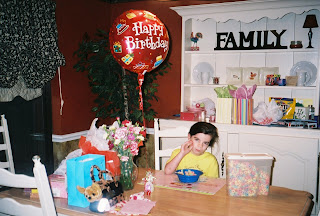 Just a few Maddie funnies, before I completely forget them! Tuesday morning when I picked Maddie up from school she was sitting in the back seat telling me about her day, what she wanted for lunch and then out of the blue she says, 'One day this week let's go to Disney World.' I told her I thought that was a fabulous idea! As she thought about it some more she decided she wanted to wait until Bubba wasn't on oxygen and that would be in about 100 days! So thoughtful, thinking of Bubba that way!

Last night Kayleigh was working on a paper for school about the Dust Bowl. Well, Craig was working with her on the computer and a discussion about all the dust came up. Somehow out of that conversation Maddie says to Kayleigh, 'Don't you know people are made out of dust, bones and ribs, Kayleigh!' I said to Maddie, 'How do you know that?" And she said, 'because my Bible tells me so!' I said, 'where does it say that?' She promptly went and got her children's Bible and found the page that the story of Adam and Eve was on and it said God made Adam out of the dust. 'See, Mom I told you so!' You go girl! As funny as it was I was really proud of her incredible memory! 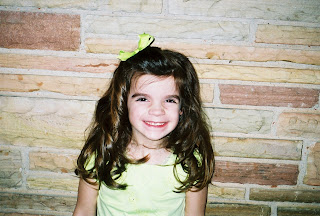 I can't believe it's May!! I am ready for warm weather and spending time outside with my kids. This week has been busy. Monday Kayleigh came home with pink hair! Her school is having a cancer drive so each day this week they get to do some fun and crazy things! Pink hair being one of the craziest! Kayleigh has also been busy with softball, mostly practices since it has rained on every scheduled game she's had so far! Hopefully tomorrow it won't rain and she'll play her first game. We love going to the ballpark, having a hot dog and enjoying the game! 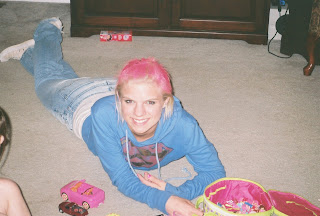 Maddie is getting ready for her first dance recital on May 12th. They are working on a tap routine to 'I Will Follow Jesus'. Hopefully we've been paying attention and the recital will be a success! Tuesday was picture day at the dance studio, it was chaotic but I'm sure we'll have some great pictures. Here's Maddie in her recital costume. She's very excited to wear it, I hope she'll be as excited when she realizes she'll be dancing in front of an audience of parents, granparents and lots of family and friends! 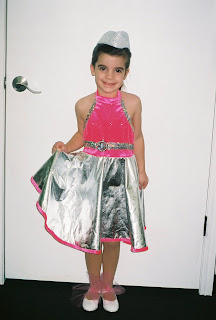 Fletcher had a great day today! We started the day with speech therapy and after that off to school we went. Fletcher had a blast in school where they sang songs and played games. Today they gave him a baby doll and he loved it! Craig wants us to call it an 'action figure' but this baby doll is far from an action figure! She is all baby doll, soft and cuddly and PINK!!! Fletcher lights up the minute he sees her, he kisses her and smiles the whole time he has her! I had used up all my film BEFORE class so I didn't get a picture of his baby, but I'll get one soon! Maddie wanted to see her Bubba so we went up there after she got out of school. She had a picnic in his bed and played with all his toys! Fletcher also had PT on his schedule today so we stayed for that. Boy am I glad we decided to stay! Today his physical therapist brought a gait trainer to his unit, which is basically a walker. How exciting to see him in a standing position where his feet touched the floor! This was a new sensation for him, first she took his shoes off, then his socks! I don't think his feet have ever touched the floor. I cried like a baby today watching him in that thing. He couldn't move the gait trainer today, but I believe one day he will. Maddie and I pray together every morning and we are specifically praying for strength in his lungs, neck, back and legs. Maddie always prays for him to be able to crawl and walk. What a joy to be able to see what the Lord is doing for him. Fletcher is now able to hold his head up on his own for 5 to 7 minutes at a time. I am posting a picture of me holding him supporting him only by his waist. 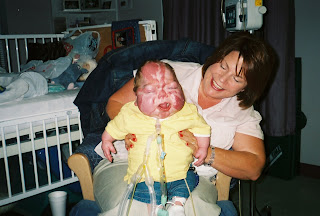