Well, we had a wonderful Valentine's Day with Fletcher here at home with us. I made beef enchiladas and salsa. I also made a strawberry cake with cream cheese frosting! Yum-o! We just hung out and played with Fletcher most of the day. Craig's parents came over and joined us for dinner. It was a great day! Fletcher sat up in his high chair for quite a bit. At the end of the day we were practicing sitting up. Fletcher sat up unassisted for about 20 seconds! It was so amazing! We were able to catch it on video!!! 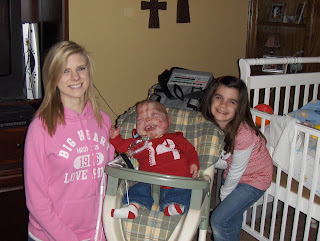 Three of my favorite Valentines! 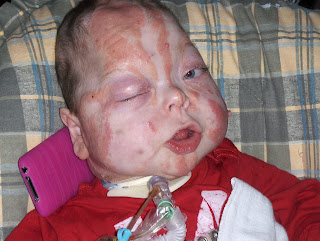 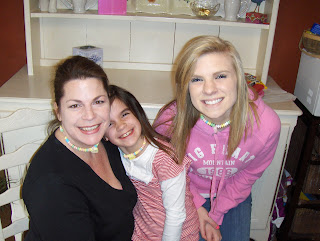 Craig bought all three of his girls candy necklaces! 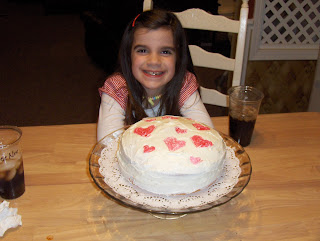 We're having some spring weather here in OKC during February! We've had several tornadoes today. And it's not over yet! The girls were on lock down and are now home safe and sound. They also put TCC on lock down and Fletcher is safe as well, bored but safe! 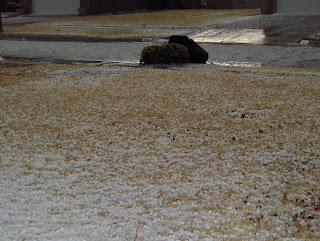 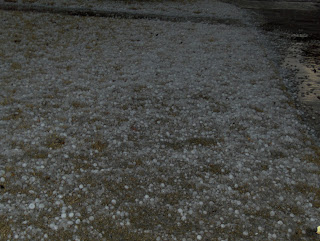 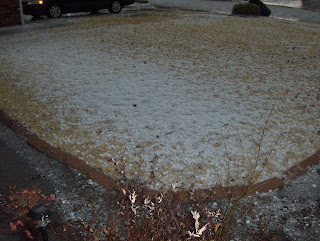 Posted by Denise at 4:19 PM No comments:

Would you look at him...

There's nothing Fletcher likes better right now, than the stacking balls he got for Christmas. They are pretty cool and you can do so much with them. We always start by stacking them up and Fletcher takes them apart one by one. Then we usually help him snap them in to a ball. Well, Fletcher Burns is now able to line them up and snap them together by himself! It's such a blessing to watch him work, he gets frustrated easily but when he gets them together he just smiles! I've been trying to get it on video for about a week and on Sunday one of Fletcher's favorite RT's was able to capture it on video! We also put his bed in a sitting position and hooked up his DVD player he seems to really like Sesame Street. Hope you all enjoy these little videos. 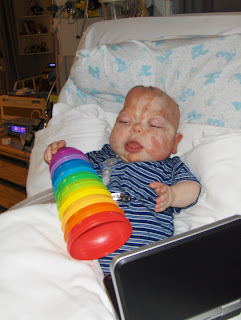 This is how it starts... 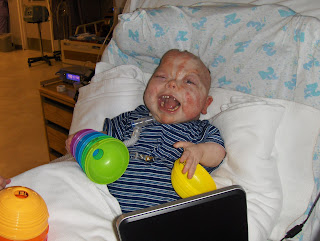 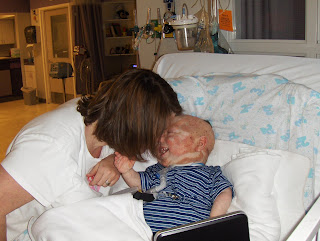 Surgery update and a bit more...

Fletcher's surgery went well and they were able to place a port in him. Praise the Lord for that! One thing I dislike about Children's Hospital is that it is a teaching hospital. I realize these people have to learn somehow but seriously? Fletcher was basically a pin cushion for about three residents on Wednesday! Apparently he had two surgical residents on either side of him poking and prodding on him I'm guessing to see who would find the best vein. Our recovery nurse wasn't the brightest star in the sky either. Fletcher came out of surgery a little loopy and it was quite humorous. But once he noticed he had an IV in his hand he got mad and started flailing his arm up and down and blood was flying all over his bed. He also had and opening below his shoulder where one of the residents was unsuccessful in putting his line in. It started to bleed like crazy as well. She obviously didn't know what to do. So another nurse came over to help. They had to have permission to take the IV out so that took some time. Then about 10 or 15 minutes later his incision where the port is started bleeding to the point where the surgeon was called and had to come and help stop the bleeding. Fletcher is anemic so all the blood was freaking me out! I just kept saying, 'he's anemic, he's anemic, he's anemic!' Which didn't seem to bother anyone. Fletcher is allergic to Tegaderm, which is a clear bandage basically. Before he went into surgery they asked me about the Tegaderm and made sure that was the only thing we knew of that he was a allergic to. Well, sure enough Fletcher came out of surgery with Tegaderm covering all three incisions! So it was a day of mishaps and we couldn't wait to get back to TCC.

Maddie has had strep all week and finally went back to school today. Our pediatrician is concerned about the frequency that Maddie gets strep so we have an appointment with an ENT on February 23rd. I don't know what we'll do if he wants to take her tonsils out. We're very leery about the whole tonsil thing. So, we'll just wait and see what happens and worry about that on another day! Maddie also got her first professional haircut! I've always cut her hair but she has so much hair and it's really hard to cut. Maddie loves it and it looks so cute, but she looks like a 3rd grader! I really don't like that my babies are growing up on me it's hard on their mommy! 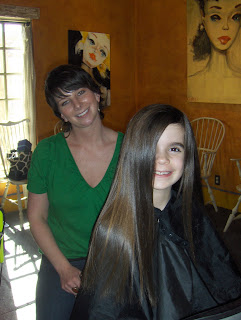 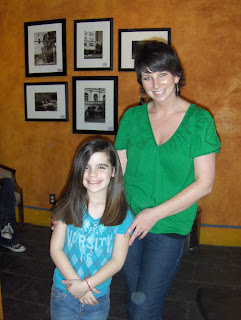 It's been a busy few weeks! Last week we had a little ice/sleet storm and the girls were out of school for three days. The girls were quite bored and since they were out of school and so were their cousins they were able to spend the night with them during the middle of the week. It was a nice break from staying inside our little grey house! But by Thursday Kayleigh was ready to go back to school. Not because she wanted to do some learning, mind you she missed all of her friends! :) Kayleigh received the book Twilight for Christmas. She started reading it on Christmas day and is currently reading the fourth and last book in the series. Craig is quite thrilled to see his daughter READING! Kayleigh really isn't a fan of reading but she has so enjoyed this series. 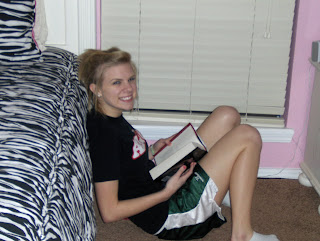 A few weeks ago Maddie's school had a dress up as your favorite storybook character. So she wore the Little Red Riding Hood costume Kayleigh wore when she was about the same age. I've been looking for the pictures I took of Kayleigh when she wore it but I can't find them! :( Maddie also received an award for knowing all of her vowel sounds. Please allow me to brag on Maddie for just a moment. A few weeks ago I was volunteering in Maddie's classroom. During reading time Mrs. Johnson spent a little extra time with Maddie. Later Mrs. Johnson told me that by the end of 1st grade the children should be on level 16 and currently Maddie is at a level 30! WOW! Now Maddie, she's a girl that loves to read! We're hoping she'll continue on that path! Way to go, sis! 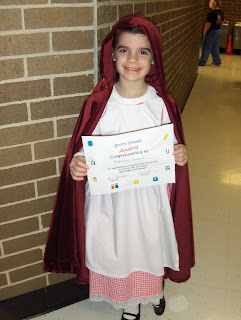 Fletcher is doing really well! He's been working on a computer with his speech therapist, Heather quite a bit lately. He really seems to like it. There are still a few challenges they're trying to overcome equipment wise. Fletcher's little arms are so short maneuvering the computer has been difficult. We're trying to get the screen close enough that he can touch it. We've tried him in his wheelchair and it just doesn't quite work. Heather has been sitting him in her lap but that still isn't giving him the independence he needs. But, if I know Heather, she's going to find a way to accommodate my sweet boy!

Fletcher will be having surgery on Wednesday. The tubing on his central line has broken in two places. This line has only been in place since November 26th! That line should have lasted at least a year. The tubing, which is on the outside of his body can't be repaired so he has to have it surgically removed and replaced! We're hoping that they can put a port in him instead of central line. But we've been down this road before and have been told he has too much scar tissue. It would be such a blessing if he could have a port. A port would be under his skin, you wouldn't be able to see it. I would love for him to have one less tube hanging off of his little body. Would you guys please pray for him on Wednesday? Thanks! 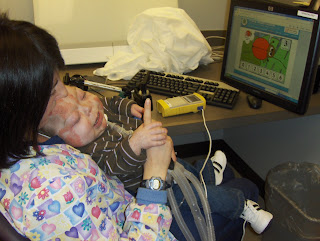 Heather and Fletcher working on the computer

During the ice/sleet storm I was stuck in the house and scared to take the risk to drive on the icy roads. The first day of the storm Craig came home and took me to TCC so I could see Fletcher. It's not very often Craig and I are there together. Actually that day one of the nurses came out of the unit she was working in just because she saw us in the hall. She teased us saying she didn't think she'd ever seen us together! Fletcher was in great mood and he enjoyed having both of his parents to play with. Craig and I do things so differently when we're with him. I basically hold him and read 12 or 13 books to him in one sitting. I have also enjoyed holding him in his bed in an upright position and letting him see what's happening. Craig plays with him the whole time and always wants to teach Fletcher something new. Fletcher doesn't let Craig hold him for very long periods. But when he does Fletcher loves for Craig to 'tickle' his back. Craig is the only one who can get Fletcher in the position he's in, in the picture below. 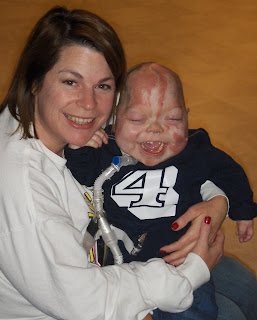 Sitting up with mommy! 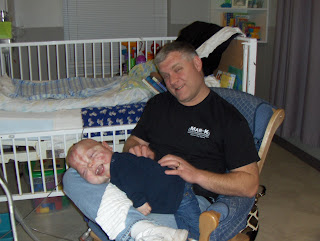 Tonight we ended our day as family playing UNO. It was Maddie's first time to play and she caught on quickly. We all had fun laughing and just being together tonight. We need to make that happen more often it was good for all four of us!
This video is from today. He's such a flirt these days! Enjoy!
Posted by Denise at 5:56 PM 5 comments: